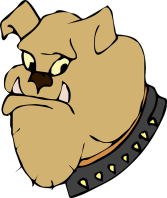 I’ve enjoyed running for almost 3 months now. Every time my feet touch the pavement I’ve prayed that I would not strive for physical training, but that the Lord would train me in godliness. Only as an extra perk, I hope my body to be physically fit, healthy and ready for any service which He may call me to. Through these months I’ve seen the Lord manifested in the heat of the sun and the glory of its rays, the road marks along the way, water treatment facilities, creeks…the list goes on. Not to mention tiny irritations like mucus, shin splints, exhaustion from starting too fast, and things I haven’t even written publically of.  All of these things have nourished my spirit and answered my prayers.
Through my jogs one thing I have never encountered (until recently) is a ferocious dog. I’ve heard many dog attack stories but never lived it and have never feared dogs – even in the country. A couple weeks ago, while deep in thought and cruising along my usual way, I saw two dogs standing in their driveway of their home. As I passed they barked, but stayed on their side of the road. When I circled back around, and passed the house again, however, they ran up to meet me. Sensing something was different than a usual friendly greeting here, I prayed the Lord would kick them away from me and make them leave me alone. At that moment the dog BIT me! I could NOT believe it! The other thing that raised the hairs on my arm was,  as I stopped and looked at the dog, he flung back as if I’d kicked him. Not whimpering, but intimidated he ran off to his house. The bite initially didn’t hurt and I hate stopping mid-run, so I continued running and didn’t speak to the owner. Even though I was bit, I felt the Lord’s Presence with me, protecting me, for it could’ve been a lot worse!
Each time I’ve run after this incident, I have encountered dogs! I went from not being afraid of them and never meeting with any to seeing them every time and being very aware of the possibilities at hand with an unchained dog. But, you  know, life is so similar – things you don’t even expect can rear up and bite you (even when you’re minding your own business) and leave you timid for “what’s next?”. The “could happens” are all around us! There’s potential for pain or disaster lurking around every corner. No, we don’t have to go looking foolishly for these things, but the reality is we must STAND FIRM against fear of the what-ifs!
Adam and I leave for Africa in less than two weeks. We have had countless conversations with people – friends, family, co-workers – UPSET that we are still traveling there. Now, I realize this trip has its risks – and they are valid concerns – but in the end, I believe them to have as much bite as that dog did. The bottom line of truth that we stand on is this: The Lord asked us to go, and we will obey, regardless of the cost.
I haven’t feared Ebola or plane crashes or bacteria infections or _____ or _____ heavily until we committed to this trip. The dogs I’ve encountered along my jogs, to me, perfectly symbolize the fear attacks of the enemy against my soul to deter me from the work He’s called me to do and BE. And I renounce them all by the perfect covering of my Savior. I pray He kicks them all in the head and we see the evidence of His Sovereign Protection! For we serve  a God who makes light shine out of darkness and who thwarts every weapon purposed against us. Life may hurt at times, but it is achieving for us an unseen greater glory that far outweighs them all.
So I write this to you dear friends…that you will circle around us in prayer and supplications of all kinds to strengthen us in our journey abroad. Yes, fear pricks at us, but it is not our MASTER! We encourage you to stand firm in that truth as well. May the words of Isaiah 54:14-17 be true of our trip and give you encouragement and victory in your lives as well.
“In righteousness you will be established: Tyranny will be far from you; you will have nothing to fear. Terror will be far removed; it will not come near you. If anyone does attack you, it will not be my doing; whoever attacks you will surrender to you. ‘See, it is I who created the blacksmith who fans the coals into flame and forges a weapon fit for its work. And it is I who have created the destroyer to work havoc; no weapon forged against you will prevail, and you will refute every tongue that accuses you. This is the heritage of the servants of the Lord, and this is their vindication from me,’ declares the Lord.”