Recently, in an effort to zone out from all the activity swirling around me and actually rest, I queued up The Lion, the Witch and the Wardrobe. For what better way is there to escape the worries of this world than to wander through the wardrobe with Lucy and embark upon an adventure filled with curiosity, faith, fauns, talking beavers and a battle of Good vs. Evil?

I’ve read the book and seen the movie many times, but the line that caught my attention this go-around was when Peter, Susan and Lucy entered the home of the Beavers. Mr. Beaver looked at all of them and said “Aslan is on the move.”

When God is on the move, you know it. The air is different. Your spirit is stirred, restless even in anticipation of what is coming next. You can’t  quite make out what it looks like, but there’s a rustling in the bushes and like a dog with his ears perked, you are waiting expectantly to figure it out.

When God is on the move, there are preparations to be made. Mrs. Beaver was busy in the kitchen preparing food for the long journey to the stone table. She had to work quickly, for by that time Edmund had reached the White Witch’s castle and informed her of the Beaver’s plan and Aslan’s coming.

Life was never the same after Mr. Beaver declared “Aslan is on the move.” From that point on, the animals and the Pevensie children tucked their tails and made haste to the stone table where they would dwell safely in Aslan’s camp.

But you know that journey didn’t come easy. To avoid being caught, they hid in an underground tunnel, in the tree-tops and broke away on an iceberg. Finally they arrived thinking the journey was over, yet the real battle had just begun.

All this reminded me: Spiritual warfare is real. When God is on the move, crazy things start happening!

Last week was book launch week at the Steck home. I believe God is on the move in new and mighty ways, and with that comes great warfare and battle in the heavenly realms.

In the physical realm that warfare looked like sleepless nights, unexpected work on the house, frustration, grumpy attitudes, sick kids, thunderstorms and long hours at the office.

Early one morning at 1 a.m., Adam and I looked at each other and said, “We are on to something BIG.”

We’ve experienced warfare before. In fact, every trip to Kenya had its battles, but last week was greater than I’ve ever been through before. I felt like the Pevensies escaping one close call after another, dodging fiery darts in every direction without a moment to stop and let my arms and legs rest.

Chaos is how Satan works.

He disrupts the balance of the air, the lines of communication in relationships, the peaceful attitude and tries to knock us off kilter. He lobs his fiery darts aimed precisely at our weak points to break our focus off the horizon line and fear the angry waves instead. Once he’s got us afraid, we might think it’s time to pull back or surrender all together.

But this is no time to pull back. God is on the move, and He is moving in you first!

This is the time to persevere! Keep going and don’t stop for a second. God will provide an underground tunnel, a tree-top or a melting iceberg to keep you safe.

This is the time when you put on the whole armor of God. When it feels like all Hell has broken out against you, you can stand your ground girded in His armor. When you’ve made every preparation, taken every precaution and finished all you can, you can stand tall.

You stand firm on the Word of Truth and His promises. (Philippians 1:6)

You stand firm in the fact that you are His child and righteous in His sight because of Jesus. (1 John 3:1, Isaiah 32:17)

You stand firm with your feet firmly planted in peace and trust that He will see you through this. (Isaiah 26:3)

You stand firm behind a shield of faith that thwarts every attempt of Satan to knock you off balance. (Hebrews 11:1)

You stand firm with your sword held tightly in your hand, ready to counter any lie with the Truth of God’s word. (Luke 4:1-13)

And you pray, all day, everyday for strength, faith, trust and ultimately victory to be yours through Christ. (1 Thessalonians 5:16-18)

Is God on the move in your life? Then be ready. There’s a white witch after you, but a Lion who’s already won the battle on your side!

Some questions to ponder:

How is God moving in your life right now? Is there something you feel Him asking you to do?

Are there distractions trying to get you off course?

How are you responding to them?

What can you do to stay focused on what God has called you to?

Have you heard about my book No More Secrets? You can purchase your copy through Amazon today! 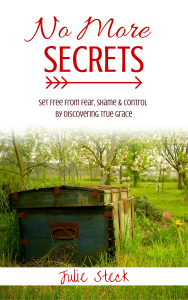 3 thoughts on “When God is On the Move”