Do you ever feel like you’re just a minor character on the stage of your life with little or no lines while someone else dances around as the star? Have you felt like everyone but you has a center stage ministry and you get lost somewhere in the background?

I have. Felt that just yesterday.

“Why, Lord am I stuck doing this, when I could be like her doing that?”

It’s easy to let those emotions take control. But when I turn to the Word, instead of continuing to compare and allow God to speak His truth to me, He sets my mind straight.

During one of those times, the Lord led me to a passage nestled in the chapter of 1 Kings 18.

I have read it often, but this time I noticed a new character. Obediah.

To most of us, Elijah is the hero of this text. And he should be. Elijah pronounced a drought over the land that would end only at his word. He called down fire from heaven that consumed a drenched altar while the altar of Baal stood untouched. Elijah’s faith never wavered as he carried out the Lord’s plan in confidence and victory.

I’m sure you’ve heard that part of the story. But have you heard about Obediah?

No, not the Minor Prophet Obediah. Turns out Obediah was a common name during Old Testament times. Like Bill Smith today. This Obediah was a devout believer and the house manager for the wicked King Ahab and Queen Jezebel.

Obediah saved the lives of 100 prophets by hiding them in a cave. That’s one hundred people saved from the deadly plot of Jezebel who wanted to wipe out every Prophet of the Lord.

For ever since Elijah demanded the rain to cease, the clouds have held in their precious sustenance in accordance to the King of the Heavens.  The famine was so severe in this 3rd year that Obediah was scouting the fields in search of any morsel of food for King Ahab’s herd.  He scoured every hill, valley, crack and crag desperate for anything to save their livestock.

What I want to know is how did Obediah find food during a famine where there wasn’t enough food for the animals? How did he feed 100 people right underneath the King’s nose without him even smelling it? And the cave – where was it? How do you stumble upon two caves perfect for securing fifty people each in them? He must have had some special GPS (God’s Power Surge) device to do all that!

Obediah’s faith encourages me on days when I’m frustrated with my limitations and wishing my life looked more like hers over there. The lesson that hit my frustrated heart is this:

Elijah was called to do BIG things for God, and has seven chapters written about him. Obediah, on the other hand, stayed close to home and hid a few prophets underground, all recorded in a few verses marked off by parentheses.

I find myself often wishing my life looked like Elijah. I wish one of my stories would hit the front page. Don’t we all?

I can look at my children or where I live and become frustrated at the limitations I face. I look at my underground caves and think it isn’t much. I think people like Elijah do much more.

Or, I can look at my home and where God has placed me and hide the escapees He sends my way.

For neither of these men are more or less important in God’s eyes. God knows my situation. He knows yours. Front page headlines may be more glamorous and gain more Facebook likes, but they aren’t the only story. There are people like Obediah who live courageous and sold out lives for God while they serve the Lord with an undivided heart right where they live.

Where are you dear friend? Are you on the front lines of the mission field? Or are you hidden it seems from the camera lights? Take comfort in the story of Obediah. God sees us. Whether we’re on center stage or in the background we can do great things for God!

I hope your faith is growing along with mine as we explore this topic of faith every day for 31 days. If you’re just now joining me, you can catch up on all my posts HERE. 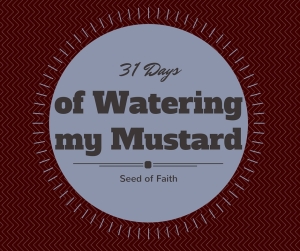 8 thoughts on “Faith on Center Stage and Behind the Scenes”